“THE TRIAL FROM HELL” – IT’S TIME FOR TODAY’S TECHNOLOGY

“THE TRIAL FROM HELL” – IT’S TIME FOR TODAY’S TECHNOLOGY 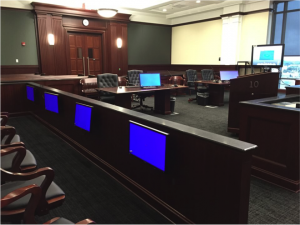 Why is Paper Still King in King County?

Even though the first 20 years of my practice were spent in civil litigation, my real love since the 1980s was computers, and then, in the 1990s, the emerging Internet.

[1]
So in 1995 I gladly accepted the invitation from Presiding Judge Dale Ramerman and King County Superior Court Clerk Jan Michaels to join the Steering Committee on Electronic Court Records.[2] We were going to create the future of paperless courtrooms!

In 1995 there were only a handful of lawyers who even knew what a PDF file was.

Imagine my surprise to see what still goes on today

In 1994 I switched to full-time e-discovery consulting and expert witnessing. I followed my bliss. My work was chiefly in federal courts around the country. Thus, only a few months ago did I find myself once again in a King County Superior Courtroom, reluctantly appearing pro bono as counsel for a relative.

Was that a surprise. I felt I had entered a time warp. I didn’t realize that every exhibit intended for use at trial still had to be printed out and put in tabbed binders, with duplicates to the other side and to the judge.

Yes, even though the clerk got the PDF electronic versions via the online ECR (Electronic Court Records) system, as did the judge, paper was still king. And even though it was indeed almost exclusively the electronic PDF exhibits the judge viewed on his big computer monitor during the course of the trial.

The obvious wasteful redundancies didn’t seem to bother either the judge or the clerk.

The trial from hell

Apparently nowadays it is left up to the litigants to set up their own electronic documents presentation system if there is to be one. Otherwise — despite the presence of electronic documents in the online ECR system — King County courtrooms linger in the paper-driven 1980s.[3]

The trial was over a property division of one asset and a community debt of $100,000 still extant five years post-divorce. The case was on remand from the Court of Appeals for a trial de novo. Because the judge had a very broad view of what was relevant, the paper exhibits (almost all printed from electronic originals!) made for a small Library of Congress. The binders were piled high on the counsel tables, on the bar before the judge, and on benches in the public area.

It is dumbfounding that the King County Superior Court has not fully embraced electronic documents as trial exhibits in order to replace paper documents wherever possible.

My trial had been evaluated by the judge initially assigned to the case to take four hours, yet it extended instead over ten days, conducted in time segments over a period of six months.

In each segment, up to an hour or more was spent in the courtroom organizing, duplicating, hole-punching, putting into binders and entering each document into a database maintained by the clerk. It took forever. And more time was wasted at trial every time a witness was asked to testify about a document that everyone then had to spend a minute or more flipping through binders to locate .

It was like an absurd Kafka novel. Literally — as in his novel, The Trial.

Time to change the entire trial process with modern technologies

Then something else dawned on me: Why are we still conducting trials in windowless courtrooms before a robed monarch as if this were still 1719, anyway? More has transpired since 1995 than the advent of the uniform PDF electronic document format.[4]

Why, for example, instead of the usual trial process, couldn’t each side make the trial a video of all the witness testimony they intend to introduce, along with all their documentary exhibits in searchable electronic format? Video editing software is now easy to use and cheap (SmithMicro’s Camtasia for Windows or Mac is a good example).

The videos would essentially constitute the bulk of the trial. Pretrial, after both sides submit their videos and e-documents according to a new court rule, the judge could then rule on which portions of the videos would be edited out as irrelevant or otherwise objectionable. Then the process would get a second phase for limited discovery. Cases in chief would be restricted to the videos.

At trial, live supplemental testimony would be limited to cross examination and rebuttal, or for whatever special purpose the judge decides.

The trial would be mostly “in the can” without all the time that gets wasted in the current slow, sclerotic process, and the dead time of recesses and lunches would be removed.

This proposed process could be a huge timesaver. Abuses no doubt could occur, but surely no worse so than what we now have.

A voluntary pilot program could test the concept and work out the kinks.

And there’s a plus: for a fee, a focus group or groups could view the videoed cases in chief and their associated documentary evidence, plus any visual aids, and then give the verdict they would give if they were the jury. Such pretrial viewings would surely significantly help to promote settlements.

Isn’t it time we put our imaginations to work to use modern technologies in order to make the judicial system more efficient, less expensive, and more responsive to public needs?

Larry Johnson is a lawyer in Newcastle and has been a member of the WSBA since 1974. He is a past chair of the KCBA Law and Technology Section and founder of E-Discovery ADR (www.esi-adr.com), serving as expert, mediator and Special Master in e-discovery matters.

Gene: here’s a visual, if you can fit it into the article, from the Florida court website, The “wired” jury box in Florida’s Fourth Judicial District, in Jacksonville:

[1] Factoid: Outgoing Senator Jeff Flake of Arizona and I had the distinction of being for a while the only lawyers in the entire world with a web site on the Internet. We had taught ourselves HTML code and how to create a web site. We corresponded and congratulated ourselves on how very cool we were.

[2] For more information about this initiative as it was perceived back then, see https://www.jstor.org/stable/27976980?seq=1#page_scan_tab_contents.

[3] By contrast, see the sophisticated and efficient, court-driven electronic documents presentation system operated by Florida’s Fourth Judicial District, as described at https://www.jud4.org/Technology. And of course, the federal courts are light years ahead of our dog-eared King County courtrooms in just about every respect.

[4] Which, as an aside, should always be in text-searchable format as required by the Civil Rules. It is a pernicious practice to produce PDFs that are intentionally created to be not searchable.