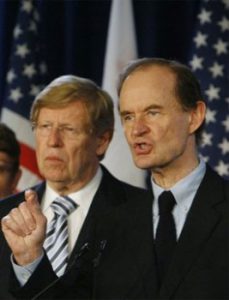 When the two adversary lawyers in the Bush v. Gore case, David Boies and Theodore Olson, teamed up to challenge California’s Proposition 8 in a federal lawsuit, they created the TRUE LEGAL DREAM TEAM. They also proved to be exceptionally fine co-authors when they recounted their pretrial preparation, trial and appellate experiences in their book entitled, Redeeming the Dream: Proposition 8 and the Struggle for Marriage Equality, Penguin Group (2014).

The two lawyers divvied up the lead counsel roles based upon their proven skills; David Boies took the lead for the trial phase; and Ted Olson was lead counsel for their appearance before the United States Supreme Court. Ted Olson who was first onboard described how the team was formed in this way:

“The process of finding the ideal lawyer for the role we had in mind took several weeks while we were locating the right plaintiffs, fine-tuning our strategy, and preparing the case. But the epiphany, when it came, struck all of us as a perfect solution. During a Saturday conference call in May to discuss strategy, I suggested my Bush v. Gore opponent, and by then friend, David Boies, California’s motto ‘Eureka’ (‘We have found it’), leapt to mind.

While most of the chapters in Redeeming the Dream are written by the co-authors, some of the chapters have single authors. For instance, Ted Olson wrote Chapter 9 describing “David’s Cross-Examination” and David Boies wrote Chapter 10 that examines “Ted’s Closing.” This division of the authorship serves the reader well because the two authors have formed a mutual-admiration society and the sole author is turned loose to fully expound upon the skills of his co-counsel. Examples of Olson’s effusive praise and description of David Boies skills as a cross-examiner can be found here.

The story of David Boies’s and Theodore Olson’s advocacy in this landmark civil rights case has also been chronicled in the documentary film The Case Against 8.