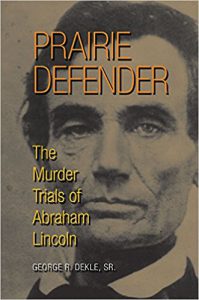 George (Bob) Dekle’s book entitled Prairie Defender: The Murder Trials of Abraham Lincoln provides a brilliant anatomy of Lincoln’s murder trials. It is a great read on multiple levels. First, it reveals the true nature of Lincoln’s trial practice, debunking myths with solid evidence and providing an accurate description of his trial work. For instance, while some historians have asserted that Lincoln shunned any criminal cases in favor a civil trial practice, Dekle not only chronicles his murder trials but also notes that he tried “. . .approximately one per year for his entire career, not a shabby number for a general practitioner in a sparcely populated jurisdiction.” For any Lincolnophile seeking to fully understand the man and his law practice, this book is a must.

On a second level, Prairie Defender is packed with intriguing trial war stories. For example, the case of People versus Archibald and William Tailor was so remarkable that as Dekle states, “Lincoln tried many interesting cases in his career, but the facts of the case under consideration were so bizarre that he felt compelled to reduce them to writing.” How often does it happen that an alleged murder victim is found very much alive?

Some of the stories and anecdotes in Prairie Defender are amusing. In the People versus Anderson trial, the prosecutor (who had arrived after the trial had commenced) in closing argument pointed at a young man at the defense table and said, “Gentlemen of the jury, if you wanted any additional evidence of this man’s guilt, it would only be necessary for you to recur to his boldness and impudence during this trial. You can see guilt written all over his countenance.” At that point the young man rose and said, “General Linder, you are mistaken; I am not the criminal, but my name is Rosette; I am a lawyer, and one of the counsel for the defendants.”

Third, Dekle, who is a veteran trial lawyer having tried over a hundred homicide cases, provides astute analyses of Lincoln’s murder trials which are instructional for trial lawyers who want to understand how they can improve their craft. Here is a taste of the author’s discernment:

“A prosecutor needs five ingredients to ensure a conviction: (a) an agreeable jury, (e) an egregious crime, (i) an innocent victim, (o) an odious defendant and (u) undeniable guilt. Of the five vowels, (a) is the most important, and the next three, (e), (i), and (o) are essential for the prosecutor to have that critical first ingredient. No matter how undeniable the guilt of the accused, if the jurors are not upset about the crime, if they dislike the victim, and if they sympathize with the defendant, the verdict is going to be not guilty. On the face of things, the Wyant case had all the vowels.. . . (Dekle goes on to apply the vowels to the case).”

These are but a few examples of why Prairie Defender is both engaging and edifying. This is a book that belongs in the library of anyone with an interest in trial work, Lincoln or just a good read.