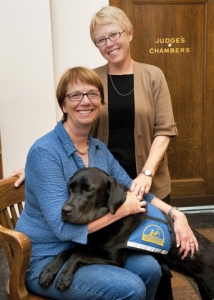 An important manual concerning courthouse dogs has just become available to the public. Courthouse dogs provide emotional support for child and other vulnerable victims and witnesses in the legal system. In the not too distant past, vulnerable victims were given short shrift by the justice system. The manual recounts my experiences with children in the criminal justice system, which the manual accurately describes as the “Bad Old Days” as follows:

While chatting about how the treatment of children involved in the legal system has evolved over the years, Ron Clark, a Distinguished Professor at the Seattle University School of Law, described what now would be seen as an archaic and traumatizing procedure that took place while he was working as a deputy prosecuting attorney during the early 1980s. At that time little or no thought was given to how intimidating the courtroom would be – that a child, seated just a few feet away from the defendant, might struggle to describe what had happened and that this experience could be retraumatizing to the child.

Ron’s story was about what happened to sexually abused children during District Court preliminary hearings.

You can read the rest of the account of what happened back then in the manual – just click here.

Spearheading the movement for the use of facility dogs and the creation of the manual are friend Ellen O’Neill-Stephens, Founder of the Courthouse Dog Foundation and Celeste Walsen, DVM.

The new manual covers, among other topics, best practices for facility dogs and how to incorporate facility dogs into a Child Advocacy Center. Of special interest to trial lawyers, particularly prosecutors, are these portions of the manual:

With the use of courthouse dogs, much of the Bad Old Days in the justice system’s treatment of vulnerable will be behind us.