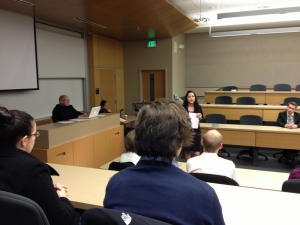 Through a Law Student’s Eyes

No matter how much you stress certain principles of cross-examination in a law school trial advocacy class, the lessons don’t stick the way seeing them come live in a courtroom does. Students in my semester-long Comprehensive Trial Advocacy course go to court, watch a day of trial and write a report about what they saw and learned. The students select from federal, state or municipal court, and they can choose either a civil or criminal share their observations.

Here is a student’s report about the importance of counsel’s demeanor and witness control during cross-examination. The name of the defendant is changed, but otherwise this is the true account:

“The student observed a case involving a twenty-one year old female defendant, Ms. Mach. Ms. Mach was charged with assault in the first degree, robbery in the first degree, and a violation of a protection order. Mach and two other males attacked her ex-boyfriend at his home. The victim was punched and kicked outside before he was dragged inside his house. Once inside, the two unknown male attackers put a knife to the victim’s throat and demanded to know where the money and drugs were kept. The victim initially told the attackers that there was no money or drugs in his home. However, the attackers did not believe him and proceeded to beat him until he told them where he kept his money. The two men took approximately $16,000 from the victim’s home. After the two men found the cash, they took the victim into the kitchen where they stabbed him five times in the abdomen before leaving.

“The victim believed that he had been set up by Mach. However, when police interviewed Mach about the assault and robbery she told police that she was not involved with the robbery or assault of her ex-boyfriend, and did not know either of the two men involved. She also claimed that she was raped during the assault and robbery by one of the attackers. In early March of 2012, Mach was contacted again by police. This time, Mach recanted her story about the rape and admitted to knowing the two men who attacked her ex-boyfriend. She informed police that she had called the two men and planned the robbery before going over to her ex-boyfriend’s house. After the robbery, Mach admitted that she was given $2,300 out of the $16,000 that was stolen from the victim’s home. . .

“The most poignant part of the trial involved Mach’s direct and cross-examinations. It was very evident that the defense attorney had spent a lot of time with Mach prepping her for these series of questions. Mach was very well spoken. She showed emotion at the appropriate moments. She admitted her falsehoods when asked by both attorneys. She also remained very calm during the entire process. What was helpful to her was that she gained credibility on cross when asked if she lied on various occasions to police. She admitted to doing so. I was also impressed with how prosecution handled the cross-examination. The prosecuting attorney kept a respectable tone with Mach and did not come across as attacking her personally, yet he was attacking previous statements she had made to police. He did a good job walking that fine line. Also, when Mach failed to answer his questions he repeated the question and asked for her to listen to the entire question before answering. He managed to do this in a way where he did not look like a jerk, and still managed to be in control of the testimony that he wanted to illicit from Mach.

“While Mach’s defense team did a good job prepping her, immediately dealing with her inconsistencies, and developing her story on the stand, I do not feel that this was enough to overcome the evidence against her. However, her candor on the stand may help her in the sentencing phase of her case.

“The defense attorney did a great job prepping Mach and showing the reasons of why Mach’s behavior may have differed from a “reasonable” person’s behavior in the same situation. However, the attorney’s delivery seemed stilted and was somewhat distracting during the examination phase. The defense attorney had a list of questions that she took to the podium with her and was reading from those questions during the entire testimony. She rarely looked up at Mach when asking her questions. The defense attorney also would ask one question and then immediately follow that up with “how did that make you feel?” She did this so often that it felt very robotic. What would have been more effective would be for the defense attorney to treat her direct more like a conversation instead of a list of questions that she was checking off as she went along.

“That was also striking to me was the distance that the defense attorney kept between herself and Mach and the distance that the prosecuting attorney put between himself and Mach. The defense attorney kept herself far away from her client, except for the one time where she approached her client to give her a glass of water and a tissue. In contrast, the prosecuting attorney stayed very close to Mach during her testimony. He also put himself directly in front of the jury box. By doing this, it struck me that he seemed to have a more “intimate” relationship with jurors than the defense attorney.

“Overall, I feel that both attorneys did a good job. They kept their statements and questions to the point. There were some minor changes that I think the defense could have made to be even more succinct; however, I do not believe that anything she did was detrimental to her client. Since Mach’s testimony was so lengthy, I was not able to observe the other two witnesses that were supposed to testify that day. Due to the lateness of the afternoon, the trial was recessed until next week.”