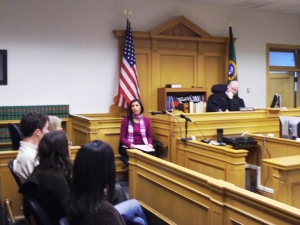 No matter how much you stress certain principles of pretrial and trial practice in a law school trial advocacy class, the lessons don’t stick the way seeing them come live in a courtroom does. Students in my semester-long Comprehensive Trial Advocacy course go to court, watch a day of trial and write a report about what they saw and learned. The students select from federal, state or municipal court, and they can choose either a civil or criminal share their observations.

Here is a student’s report about the importance of professional courtesy and trial preparation – two principles that are taught in every trial advocacy class. The names of the participants and place are changed, but otherwise this is the true account.

“Several aspects of this trial stood out to me. First of all, I had never seen a judge take such an active role during trial proceedings as Judge Hoppy did in this case. At one point, for example, the judge responded to the objection, ‘Lack of foundation,’ by simply laying the foundation himself: instead of requiring the defense attorney to do so, he turned and asked the witness whether she was personally familiar with the subject on which she was testifying.

“Yet as uncivil as the plaintiff’s attorney and the plaintiff’s attorney’s colleagues may have been, at least they were prepared for trial—the defense attorney was not. For some reason, the process of establishing a proper foundation was the defense attorney’s worst nightmare. Not only did this trigger a series of objections by the plaintiff’s attorney, it made the defense attorney come across to the jury as incompetent and unprepared. The worst instance of this trend was when the defense attorney began questioning the second witness about a report prepared by a third party network security contractor. First of all, the report had not yet been admitted into evidence. Second of all, not only was the report not in evidence, there was nobody present in the courtroom who could authenticate it. The witness had no personal knowledge of how the report was created or where it had come from—all that he knew was that the city of Jamestown had received it from a 3rd party contractor and had given it to him. As debate over this issue brought the trial to a halt, Judge Hoppy was clearly not pleased at the prospect of delaying the witness’s testimony for a day so that the defense could call someone else to authenticate the report. . .

“Observing this trial reminded me of two rules that are easy to follow in theory, but probably difficult to follow in practice: (1) be civil and (2) be prepared. Despite the degree to which I was unimpressed with nearly all of the attorneys involved in this case, I know that their jobs are not easy. Trials can be enormously complex, as well as heavily emotional. Truthfully, it was to some extent comforting to see trial attorneys making mistakes in court—it made the prospect of conducting my own trial someday less daunting. But as difficult and emotional as trials can be, I was still disappointed. Even with my limited experience, I am confident in concluding that the conduct and preparedness of the attorneys in this trial were subpar.”