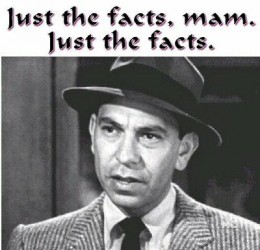 On the old TV series Dragnet, Sergeant Joe Friday wanted his witnesses to tell him “Just the facts, ma’am, nothing but the facts.” This objective is as important on cross-examination as it was to Sergeant Friday. On cross-examination, you want just the facts, and you want your facts in small doses. One of the basic maxims of cross-examination is to limit each question to one fact. The main reason for asking one-fact questions is to control the witness. Each fact you add to your question gives the witness another chance to disagree with you and either avoid making the damning admission or mask it in a torrent of words.

Q: When you were walking down the sidewalk, you saw your brother stab the man, didn’t you?
A: There’s not a sidewalk on that road.
Or
A: The road doesn’t have a sidewalk, so I really wasn’t walking down the sidewalk when I saw the event.
Even when you limit your question to one fact, you can provide the witness with an out by including adjectives or adverbs:
Q: You were looking closely at the two men when you saw your brother stab him, weren’t you?
A: I wasn’t looking closely at anything. As a matter of fact, I wasn’t paying that much attention.

One trial advocacy instructor teaches his students to avoid this problem by omitting all adverbs and adjectives and trying to limit each question to a five word declaratory statement coupled with a tag question:

Q: You saw the stabbing

[declaratory statement], didn’t you [tag question]?
Sometimes, however, even the shortest questions can be problematical because facts can be complex. Conclusions can often be expressed with a single word, and these single words can appear on the surface to be facts. Take as an example the following question asked of a young lady who claimed she had accidentally stabbed her boyfriend in the groin while she was slicing sausage:

Q: You chased him down the hall, didn’t you?
A: I didn’t chase him.

The “problem” with this question is that the term “chase” describes a complex fact. A number of component facts must be true in order for a chase to have occurred. The prosecutor in this situation realized that the defendant would be hard pressed to deny each of the component facts which made up the complex fact that she had chased her victim. The examination followed something like this:

Take the example of another case where a gentleman whom we shall call Michael Malefactor claimed that he accidentally shot Victor Victim in self defense. The prosecutor wanted to show that the killing was intentional, but knew that it would be futile to ask “You meant to kill him, didn’t you?” Instead, he constructed a series of questions designed to get the defendant to admit each of the component facts which, taken together, established the complex fact that the killing was intentional.

Q: After he hit you, you went inside?
Q: You went to the bedroom?
Q: You got your shotgun?
Q: You broke the breach on it?
Q: You stuck a shell in it?
Q: You closed the breach?
Q: You went out on the porch?
Q: You raised the gun to your shoulder?
Q: You cocked the hammer back?
Q: You pulled the trigger?
Q: And you killed your good friend, Victor Victim?

This type of questioning with short, one-fact questions can be powerful if you remember to ask for simple facts which the defendant cannot deny without losing credibility in the eyes of the jury. It is important, however, that you do not shoot from the hip. You must prepare your cross-examination as carefully as Michael Malefactor prepared to shoot his victim.