DON’T BOTCH LAYING THE FOUNDATION FOR AN EXHIBIT

DON’T BOTCH LAYING THE FOUNDATION FOR AN EXHIBIT 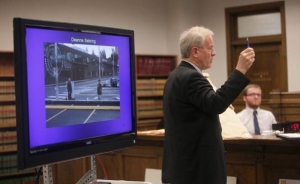 Seeing is believing and understanding. My students who take Seattle University Law School’s Comprehensive Trial Advocacy course are required to spend a day watching a trial and write a report on what they observed and learned. The students went to different courts – federal, state and municipal. They reported on the skillfulness that some lawyers displayed and the ineptitude of others. Their experience in observing lawyers at work drove home points covered both in their class assigned readings, lectures and discussions about trial advocacy. One critical area is the importance of knowing how to lay a foundation for the admissibility of an exhibit. It was a treat to read the observations of these novices, and here is one on preparing for and laying a foundation for an exhibit.

Student Dylan K. who watched a driving while license suspended in the second degree case reported on his observations as follows: “The first, and ultimately last procedure I watched were preliminary motions, the day of trial. The first and only witness called was a custodian of records for the Department of Licensing. The questions of the State’s attorney focused on the custodian’s training, the specific unit she was a part of, and the manuals she read for her job.

“After laying that foundation, he attempted to ask her about the defendant’s driving record. However, he was unable to lay the proper foundation for a business record exception to hearsay. Additionally, he did not try to lay foundation for public record. The prosecutor’s attempts to admit the driving records went from bad to worse.

“The direct went so badly that a number of very unusual events transpired. The prosecutor asked for a brief recess to go and talk to his supervising attorney. This was granted and he left for 10 minutes. He came back and asked the exact same set of questions. The judge still sustained all of the defense attorney’s objections. The objections were for a lack of personal knowledge and foundation. The defense was claiming that there was a failure by the department of licensing to give notice to the defendant that his license was in fact suspended.

“Without admitting any of the driving records, the prosecutor rested. The defense called no witnesses and did not cross-examine the custodian. The prosecutor went on to argue as if the records had been admitted. The defense attorney stood up afterwards and succinctly stated that none of the evidence had been admitted. Since no documents demonstrating that due process occurred were admitted, the defense asked for a dismissal. The judge agreed and dismissed the case because the documents were not admitted. The case was dismissed with prejudice.

“I learned a lot about the value of knowing the rules of evidence. If the prosecutor had taken the time to read Tegland’s (the state of Washington’s courtroom evidence handbook containing predicate questions, evidence rules and case law summaries) and create a checklist, he would not have faced the same issues with laying foundation. Additionally, I learned the value of meeting with your witness and knowing their answers to your questions before appearing with them in court. I learned this because while the prosecutor was asking the custodian questions, it was revealed that the custodian had not printed off the driving record herself. In fact the prosecutor had, and under the best evidence rule 1005, there would have been no way for the custodian to testify that this copy was the same as the original because she had never compared the original to the copy offered in court.

“The lesson I came away with is that you cannot be too prepared for court.”

What a priceless lesson.