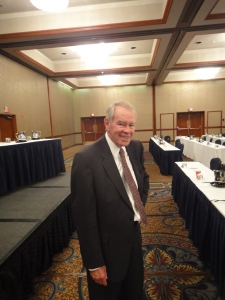 This week I was in Columbus, Ohio at the Ohio Prosecuting Attorney’s Association Spring Training. Pictured here in the ballroom of the Sheraton Columbus Hotel during a break in the training is John Murphy. John Murphy is the Executive Director of OPAA, and he is the second most senior head of a state prosecutor association in the country, having held the title of Executive Director for well over two decades. He not only orchestrates the prosecutor training along with Steve Hall but also works toward the passage of just state laws.

John Murphy for his career has worked in pursuit of OPAA’s mission statement: “The Ohio Prosecuting Attorney’s Association assists county prosecuting attorneys to pursue truth and justice as well as promote public safety.” One portion of my presentation was on cross-examination, but also it was an opportunity to discuss prosecutorial ethics. The American prosecutor professionalism portion explored the history of the American prosecutor, the prosecutor’s role and functions as well as how to avoid professional responsibility danger zones. It’s always a delight to speak with the only lawyers who as representatives of all the people can truly say that their job is to seek and do justice.