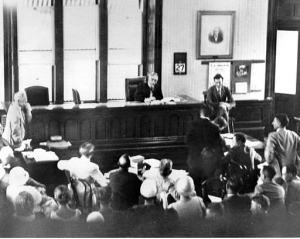 Cross-Examining the Witness Who Qualifies the Answer

We lawyers love to ask yes-no questions on cross-examination. Trial advocacy schools teach us to ask such questions, but witnesses often refuse to give us yes-or-no answers. The witness’s refusal to give us the answer we crave may stem from many reasons. Let us examine three of them: (1) The witness may be trying to evade our question; (2) either by design or default, our question may be unfair or misleading; or (3) the witness may enjoy the sound of his own voice so much that he is incapable of giving us a short answer. When the witness fails to deliver, we almost instinctively seek either to punish the witness for disappointing us or to coerce the desired yes-or-no answer. We see ample evidence of this tendency in the transcript of the Lindbergh Kidnapping Trial.

The state called eight expert witnesses, each of whom identified Bruno Richard Hauptmann as the author of the ransom notes sent to Lindbergh. On cross-examination, the defense sought to elicit helpful testimony from the experts by asking questions which they desired to be answered either yes or no. Anyone who has had much experience in cross-examining experts knows that yes-or-no answers are very difficult to elicit from experts. Usually it is because we lack sufficient knowledge of the subject to frame an adequate yes-no question; sometimes it is because the witness is intoxicated by the sound of his own voice; and occasionally it is because the witness is trying to evade the question. When cross-examining the handwriting experts in the Lindbergh case, the defense often asked yes-no questions and seldom got yes-or-no answers. When the witnesses attempted to qualify their yes-or-no answers, the defense responded by trying to coerce the desired answers. They often tried to accomplish this by cutting off the witness’s qualification and proceeding to the next question. One, but by no means the only, example of this comes from the testimony of the expert Clark Sellers.

In his direct examination, Sellers had analogized recognizing handwriting by its distinctive characteristics to recognizing a person by his facial features. The defense attorney sought to demonstrate that it was a poor analogy by making a mundane point: Facial recognition requires no expertise, but handwriting examination requires training and experience. The questioning went like this:
Q: In other words, Mr. Sellers, the personal identification of Mr. Sellers as the handwriting expert who appeared in Trenton would simply be a matter of common observation, wouldn’t it?

A: Yes. I think most—
Q: And the identification of a man’s handwriting—
Mr. Wilentz

[the prosecutor]: Just a minute.
Q: —would be a matter of skill and practice, wouldn’t it?
Mr. Pope [defense attorney]: I am conducting this examination and I know when the witness has answered my question.
The Court: The witness has not finished his answer. I think he is entitled to finish it.
Mr. Pope: I think he said yes, and that is all I want.
A: Yes. I know sometimes a person would like to show the shade of meaning.
Q: You would like to argue with me, but I would not like to argue and I want you to answer my questions, that is all.
A: No, I don’t want to argue, Mr. Pope.
Q: The Attorney General will give you every opportunity to explain if you need to.
Q: Now, I repeat my question: The one is a matter of common observation and recollection of a face, isn’t it?
A: Yes, a—
Q: And the other—
Mr. Wilentz: Just a minute, please.
Q: The other is the—
Mr. Wilentz: Just a minute, please.
The Court: He wants to qualify that.
Mr. Wilentz: Yes.
The Court: Now, I suppose he is entitled to do that.
Mr. Wilentz: Will you finish your answer, sir?
The Witness: Yes.
A: (continuing) If they have no more experience, probably, in identifying people by their face than they have by their handwritings, why, they could do them to about the same extent; but most people of general experience have more experience in identifying people by their facial features than they do by their handwriting. (State of New Jersey versus Bruno Richard Hauptman, Trial Transcript, page 1410 line 19, to page 1411 line 40).

When a witness seeks to qualify a yes-or-no answer, the absolute worst way to try to control him is by cutting him off with another question. First, it is rude. Second, you show fear of his potential answer. Third, you can come across as heavy-handed. Fourth, you can erode your credibility with the jury, especially when—as here—the judge sides with the witness.

Before taking any remedial action, you must quickly analyze the problem. Is the witness qualifying because your question is poorly worded? Is it because the witness is naturally talkative? Is it because the witness is being evasive? Your remedial action will be different depending on how you analyze the witness’s motive for qualifying.
Had the defense attorney done this quick analysis, he should have diagnosed the problem as volubility on the part of the witness aggravated by the fact that his lengthy question invited a lengthy answer. He was not dealing with an evasive witness, and he did not need to take aggressive measures to control the witness. The first thing to do would have been to shorten the question. Short questions demand short answers. Let the witness give his lengthy answer and then follow up with more a more tightly worded question. A possible follow up might be: