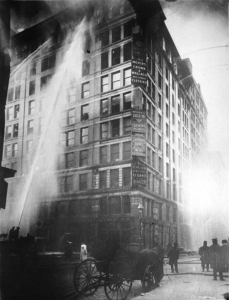 A hundred years ago today after four ballots, the jury acquitted Max Blanck and Isaac Harris, owners of the Triangle Waist Company, of manslaughter. To convict the owners of manslaughter the jury would have had to find that the owners knew the door to the ninth-floor door was locked at the time of the fire at their garment factory in Lower Manhattan. As consequence of the door being locked, the women garment workers were unable to escape the fire. 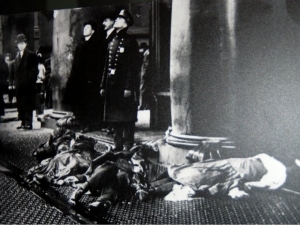 146 garment workers died, either from the fire itself or in jumping from the windows. The funeral procession was attended by 350,000 and was described as one of the “most impressive spectacles of sorrow New York has ever known.”

The last page of this month’s ABA Journal commemorates the acquittal and notes, “(t)he trial was partly shaped by famed defense attorney Max Steuer, who shifted the blame to the victims, arguing that their panicked attempts to flee had sealed their fate.” The Journal does not mention Steuer’s skillful cross-examination of the prosecution’s witness, which is covered in Cross-Examination Handbook.

The public was outraged by the Triangle fire catastrophe. The disaster caused the labor movement to grow and led to work place safety standards, the minimum wage and the New Deal. Thirty six statutes were passed setting factory safety standards.