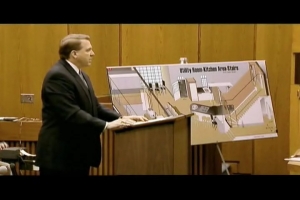 Gerry Spence is credited with introducing the concept of channeling into closing argument – speaking in the first person as though the lawyer is the injured or deceased person. In his book Four Trials, John Edwards describes how when he was not more than a North Carolina trial lawyer he channeled what happened during the birthing of his client who became the victim of cerebral palsy, as follows in his closing:

“You know, six years ago, Jennifer Campbell did everything she knew how to do on the afternoon of April thirteenth, 1979, to speak to the hospital, and the only way she know how to do it was through that strip (referring to the fetal monitor strip). And what she said to them is this. She said at three, ‘I’m fine.’ She said at four, ‘I’m having a little bit of trouble, but I’m doing okay.’ Five, she said, ‘I’m having problems.’ At five-thirty, she said, ‘I need out.’

“And she said it to everyone there. At then at six, the cries got weaker. . . And the cries they heard were the cries of Jennifer Cambell dying. . . But she didn’t die. She made it. She survived, and she’s been fighting every way she knows how since.

“And so here we are again. She speaks to you again. But now she speaks to you, not through a fetal monitor strip; she speaks to you through me. And I have to tell you right now – I didn’t plan to talk about this – right now I feel her, I feel her presence; she’s inside me, and she’s talking to you. This is her. What I’m saying to you is what Jennifer Campbell has to say to you.

Channeling in North Carolina has not been confined to civil cases. It may be no coincidence that Jim Hardin, the District Attorney in Durham, in the murder trial of Michael Peterson resorted to a sort of channeling in his closing. The murder trial was the subject of “The Staircase,” a documentary film made by French director Jean-Xavier de Lestrade. Michael Peterson’s wife was found at the bottom of the staircase in their home.

The blood spatter patterns on the staircase were strong evidence that Michael Peterson had bludgeoned his wife, and Jim Harding summed up by emphasizing that evidence:

“I started looking around the scene and in the stairwell thinking – what if those walls could talk? What would they say? Ladies and gentlemen, these walls are talking. Kathleen Peterson is talking to us through the blood on these walls. She is screaming at us for truth and for justice. It’s all in these photographs.”

Channeling during closing argument can have dramatic emotional impact. It brings the case to life in the courtroom by bringing the deceased back to life. However there are definite downside risks which will be covered in the next discussion of channeling.