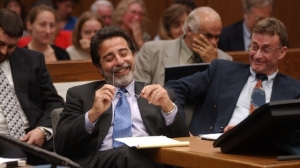 The Staircase is an excellent tool for teaching pretrial and trial advocacy. French director Jean-Xavier de Lestrade made this film after he won an Oscar for Murder on a Sunday Morning, a documentary about a murder in Florida. Murder on a Sunday Morning is about achieving justice and tells a compelling human story, and for those reasons is was for a time used as an orientation film for Seattle University Law School.

After achieving success with that film, Lestrade went up the coast to Durham, Nouth Carolina where he made a documentary about the pretrial and trial phases of the alleged murder of a woman who died at the bottom of a staircase. She either fell, which was the defense’s contention, or she was bludgeoned to death by her husband as the prosecution contended.

The filmmaker was allowed access to record both the prosecution and defense pretrial activities as well as the trial itself. Both sides were well represented and had the resources to present the case well. For examples, the defense had nationally known experts, a witness coach, and an animation of how the woman could have fallen.

The documentary is long, eight episodes, and that provides wonderful material. Clips from this film can be shown to illustrate all aspects of pretrial and trial, including: motions; witness preparation; brainstorming for case values; opening statement through closing argument; everything. And, it shows both the prosecution and the defense at work. Highly recommend it.