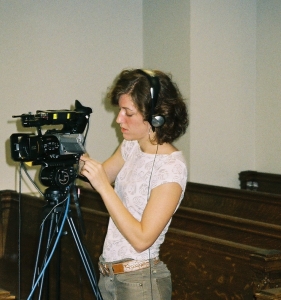 Each of us is our own worst critic. That is why a video review is such a valuable tool in pretrial, trial and appellate advocacy training. For that matter, a video review is an excellent aid for any education in public speaking. When an attorney or law student watches a video of their trial performance, the first impression is usually a surface one – I am losing hair up there – I could shed some more weight and so on. Then, the viewer begins to not only see how others see them but also gain both an understanding of what must be done to correct any performance problems and a desire to change.

Video Review as a Training Tool

A video review is an effective teaching methodology for pretrial, trial or appellate advocacy training in either law school or other advocacy training course. For example, the National Advocacy Center in Columbia, South Carolina is a federal facility dedicated to the training of Assistant United States Attorneys as well as state and local prosecutors. The Center has ten courtrooms, which are all equipped to video mock trial performances. Following the in-court performance, the attorney first receives a critique in the courtroom and then goes to a video review room where a faculty member offers a one-on-one critique.

While a professor or trainer critique is valuable, it is not critical. The advocate will gain a great deal just by observing the video performance. As part of my trial advocacy and pretrial advocacy classes at Seattle University Law School, the students are videoed in class, doing such things as opening statement and arguing a motion. They receive in-class critiques. Then, the students view the videos alone and submit reports of their self critiques. The reports on what they learned they need to work on can either be provided by a brief (less than a minute) in-class report or a short e-mail. These self evaluations have proven to be very insightful and constructive.

· Ask the person what they learned from the classroom critiques. This way the professor or trainer can avoid unnecessary overlap of advice;
· Divide the subject matter of the critique with the professor or trainers who are in the classroom. The classroom critique can focus on content while the video review can concentrate on body language, movement and speech difficulties – those things that the person can see and hear on the video.
· Keep the video running during the critique. If the video is stopped for comments, then a line of people will form waiting for their turn and the process will run over the time allotted.

The following are some problems to look for and suggestions on how to correct them:

· Pacing can distract the jury from the message the advocate is trying to convey. Movement is fine if it is purposeful, parading an exhibit for instance. Pacing is normally caused by nervousness, and the trainer can suggest techniques for reducing the nervousness, such as additional rehearsals. Another cure for the pacer and sometimes humorous, is speeding up the video to show the advocate how his dance step looks in fast motion.

· Reading causes lack of eye contact with the jurors and results in poor communication. Preparation is the principle way that an advocate can free herself from reading. The more notes and the smaller the print, the more likely that the advocates eyes will be drawn to the pages which act like an eye-magnets. Notes can be reduced to key words and only infrequently, if ever, glanced at. Another substitute for notes is to use visuals, such as PowerPoint slides; the slides become the notes.

· Fidgeting, such as playing with a pen or playing with change in the pocket, is again distracting. Usually, the advocate will be able to break the habit once it is brought to their attention as they watch the video.

· Sing-song or other monotonous voice patterns can cause boredom and even sleepiness. While a person with a soft voice will need to raise their voice for emphasis, a speaker with a powerful voice can stress a point by softening the voice.

Seeing your self as others see you is a very beneficial pretrial, trial and appellate training tool, that should be part of any advocacy training if possible.